Posted on February 11, 2011 by kimberlyblackadar 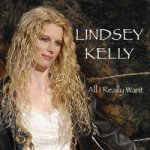 This edition features singer/songwriter Lindsey Kelly and her debut CD, entitled All I ReallyWant. Read her interview today, the review tomorrow, and most importantly, check back on Sunday to find out  how to win an autographed copy of her CD!

Lindsey Kelly, originally from McHenry, IL, now resides in Tampa, FL with Ken Kelly, her husband and writing partner, and their two dogs. She describes her family as “loving, supportive, and super hilarious,” and while contemplating her favorite color, Lindsey says, “It changes; right now I am enjoying purple.”

One thing that never changes about Lindsey Kelly (in the 25 years I have known her) is her fun creative side and her overwhelming desire to write. This release, even though it is her first album, is not her foray into the music industry.  Her journey, however, began several years ago…

When did you first know that you wanted to become a writer?

It was in middle school that I began journaling with you, Kim. We had these silly notebooks we’d pass between classes with a few friends and we’d write silly stories and comments mostly. Then when my mom divorced my stepdad of 13 years, I really began to write as a form of releasing my upsetting thoughts. I also began writing poems more often and enjoyed English classes in high school the most. Kim and I ended up becoming best friends through journaling. But the main reason I became really interested in writing was that I had a huge love-crush on a really hot guy who was an awesome writer, and I wanted him to notice me more. Hey, I’ve got to tell the truth, right?

What is your writing routine? Do you write every day? Do you have a certain place you like to write?

I journal quite a bit, practically every day. There are many times, especially with a song idea, I just have to get the idea out of my head because it keeps running over and over like a loop. The only way it stops is for me to record it or write it down. It’s a relief and a cathartic release all at once!

Do you need quiet or music to write? If you listen to music, which genre or artist evokes the muse?

No, it comes like a leaky faucet— turn it on, turn it off, but it still drips. I am grateful for the drips; that’s when the best stuff comes—the pretty words, as I like to say. (Not like these words that I am hammering out, because it is super late and Kim’s got deadlines for me. :0)

Since becoming a writer, what is the most exciting thing that has happened to you?

I co-wrote 4 songs with the drummer for Sister Hazel and my writing partner/husband Ken.  Three of them are on two different albums. The first song I ever wrote was “Better Way.”  That’s an interesting story, I suppose. It was post 9/11/2001, during a period of reflection and contemplation in my life, past and present. I was actually putting a poetry book together when the first song I ever wrote came about. Ken, who had just tour- managed for the band SISTER HAZEL and was out on another tour with another artist, called me up and asked me to listen to a bare-bone track (a song idea without lyrics or a bridge). I remember playing it the first time and getting “the chills.” I remember being compelled to listen to it over and over, with this inspiring energy moving through me, singing to me the words that ended up being the song, “Better Way.” For six hours straight, that “chills” feeling stuck with me while I wrote out the lyrics and recorded my ideas. The rest of it was co-written with Mark Trojanowski and Ken Kelly. “Better Way” went on to be recorded by SISTER HAZEL and released on their successful 2009 album, RELEASE. It also opened up the creative flood gates of lyrical and melodic composition. That’s when I had a feeling I was supposed to be a songwriter, and so I’ve been writing ever since, both songs and poetry.

Which comes first, the chorus or the verses?

Isn’t this the same as asking which came first? The chicken or the egg?  Well, for me, it is anyhow. It can begin with the ending or end with the beginning—if we are speaking of inspiration. Structurally, I tend to stay with the pop culture style of open musically with a few bars of the chorus (no lyrics) and go right to the verse, keeping it relatively short, then into a pre-chorus to chorus to verse 2, to pre-chorus, to chorus 2 into a bridge to chorus 3 and out. 2-1/2 to 3-1/2 minutes are usually the range I like to stay in. Really, brevity is an ideal thing to have when writing a song; otherwise you bore your audience to death and come off looking quite indulgent and ego-maniacal. Well, there are exceptions of course, bands like Pink Floyd, Led Zepplin and Queen got away with it. So, forget everything I just said and let the song flow out naturally; then let it go! Share it and let it go. Too many writers are so afraid of sharing their songs because of fear that someone will steal their idea. Well, this is a good way to never get your songs heard by anyone other than yourself and your few friends and family. Share, share, share…it keeps inspiration flowing, soon you may discover the secret, that giving and receiving are the same. It’s never “to get.” Once it’s about “getting,” look out here comes some good blocks to the inspiration. Let it out and let it go, this lets the inspiration extend through your heart to touch another’s heart. There is nothing more gratifying in this world then extending your heart.

I leave you with Lindsey’s favorite quote, written by Henry Miller: “The aim of life is to live, and to live means to be aware, joyously, drunkenly, serenely, divinely aware.”

Find out more about Lindsey at: www.lindseykelly.com.

Here are the liner notes for “All I Really Want”:

ALL I REALLY WANT: LINER NOTES

ALL I REALLY WANT

How the album came about:

“The songs on this album were inspired between the years 2002-2006, post 9/11/2001 during a period of reflection and contemplation of my life, past and present. All songs, words and music by Lindsey Kelly and Ken Kelly, Ken contributing the most in the writing, recording, producing, engineering, editing and mixing of this entire album. He is absolutely the most talented songwriter and musician I have ever known and I am so grateful to him for all his creative, technical and moral support throughout the creation of this album. I am so greatly thankful to our friend, Mark Trojanowski, from SISTER HAZEL, for his openness to have me co-write on several of his tracks for SISTER HAZEL and being such a huge part of my very first album as co-producer, writer and performer. I am so honored by the massively impressive musical skill of everyone playing on this cd. I’d like to thank Scott Bannevich, formerly Edwin McCain’s bass player, and Bela Wurtzler for adding their masterful bass parts to this cd. Also, a huge thank you to Brad Blackwood for the beautiful job he did mastering this album and really sweetening up the sound to the highest quality. This musical team’s synergistic, raw, natural groove carries throughout the entire cd and I hope inspires and evokes the senses within all those who listen.”

← The Know-It-All Quiz
Lindsey Kelly: All I Really Want →